Ever since I bought my 2008 Dyna Low Rider (FXDL), I have struggled with aftermarket parts because the indicator lens is on the bar clamp. Such an annoying place to have it. I have always wanted to move it, just didn't really know how. The new 2016 FXDL models ditched the indicator lens on the clamps. They moved the indicators into the speedo dash. Genius! Wish they had just done that with prior models and called it a day. Instead, here is what I had to do to move it to my dash, but not in my speedo. 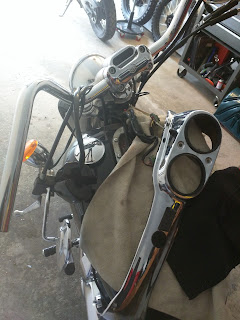 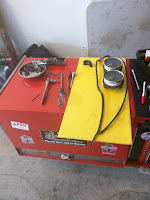 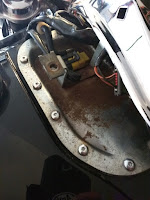 Your next step is to remove your handlebar clamp. Since I am changing my bars and risers, there are more steps to do at this point. First, it is best to start taking off the controls. I usually start on the left side. On the controls there are 4 screws. There are 2 on the outside clamp and 2 on the controls themselves. Begin with unscrew them all slowly. I basically, unscrew each one a little bit at a time, while moving from one to another until they are all so loose I can manage moving the wires out the way and clutch safely. When you work alone it can be challenging. If you have a friend, get a 12 pack a beer and thank him for the extra set of hands after the jobs done. Anyways, once the controls are off, you have to remove the left grip. I had slid mine on with lubricant. I usually take them off by squeezing a zip tie or two in there and then spraying WD40 in the opening that is made. Then you just start twisting the grip back and forth to work the WD40 and boom! the grip slides right off.

Now for right side you basically do the same thing, only you have the throttle cables you need to watch out for as well as some springs for the poor mans cruise control. So, be very careful when doing the right side. Once the controls are off, you can now proceed to remove the 4 screws on the handlebar clamp. Once those are off, you can then set the bars in the pile you probably have in your garage of all the bars you have tried. I have some for sale if anyone is interested.

Once the bars and clamp is off, since I am putting in new risers, I have to remove the risers. There is a ground wire attached to them, as well as your brake cable clamp. Be sure you remove that screw and keep an eye on your ground wire. The first time I took the risers off ever, I ended up bending the ground wire so bad that I had to make a new one with new connectors. Nonetheless, now you can start unscrewing the bolts at of the risers that you see on the inside of the triple tree. Once those are off, you might want to inspect your bushings. I had replaced mine year ago, with polyurethane ones, so I know they are good to go. I honestly wish I had replaced them with the OE rubber ones. They helped to dampen the vibration a bit better on my Dyna. The poly ones make the vibration a bit more intense. This might be a project for next winter. Now you will have things hanging off the bike. I basically made bungees my friend during this part of the project. I had one bungee holding up the right side controls so my brake fluid reservoir didn't start leaking. I had another holding the opposite side to the front frame tubes. Then I had painters tape holding the turn signals wires on the forks. The things you have to do when you don't have a friend around.

Now that everything is out of the way we can continue with working on the dash. I had to take the original clamp and I lined it up over the tapped up area in the photo below. I used it as a template for cutting the proper size hole needed for this to work.


New bars, new risers, new clamps, new relocation kit for the turn signals and a new location for the indicator lens! FINALLY!! Now I just need the snow to melt so I can ride. I should mention that I did test everything prior to making the final reinstall of all parts. I didn't want to put the dash back on if the electrical just didn't work. One thing I did run into was the bolt mounts on the dash that are welded to the tank. Some people cut and re-weld those brackets. I actually bent them the opposite way and it worked fine. 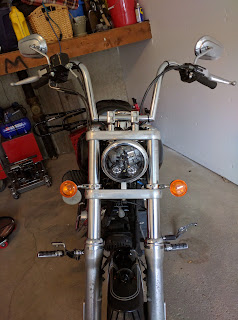 Have you been working on a winter project? If so, I'd love to hear what you have been working on. It's always fun to changes, heck even sometimes we put things back they way their were. How many of you have done that? ha! Until next time, keep the rubber side down!
Posted by Rania at Monday, January 30, 2017 No comments:

DIY - Fixing a Remote Control Due to Corrosion

This morning the heater in our condo went dead. It was screaming bloody murder, like a jack hammer to concrete. After calling the condo emergency repair line, they came running over to help. Looks like it needs a replacement fan motor. Nonetheless, it is about 18 degrees outside and the temperature indoors is beginning to drop. Luckily, I have a really good space heater made by Lasko.

However, when I pulled it out and tried to use the remote, the remote just did not work. So, I turned the unit on by hand to warm up the living room for a bit. Like any space heater, they do consume a lot of power. So, I try to just run it until it warms up and then just deal with the cold again.

That said, I had to fix to the remote. I don't want to keep getting up from the warm couch to turn the darn thing off and on. Call me lazy, call me whatever you want, but if a remote came with it, then I want to be able to use it. So, I decided to take it apart. Here's what happened.


Do you like to do DIY stuff around the house? Or do you have someone else in your home that sort of takes care of all these sort of things? In my house, my husband doesn't like to be bothered with it. I personally enjoy it!

Email ThisBlogThis!Share to TwitterShare to FacebookShare to Pinterest
Labels: diy, do it yourself, electronics, heaters, home repair, remote

My Contour Roam 1600 cam broke almost 2 years ago. I mean the camera works, just the threading to add mounts fully came out of the camera and rendered it useless. There was a hole left behind from where the plastic casing for the thread just fell right out.

Just last night I had an idea out of nowhere! I thought to myself, I can take apart my cheap selfie stick that I had bought for 3 bucks. I had some liquid nails sitting around in a drawer from a home improvement project awhile back. I got up off the couch and my husband looked at me, like what the hell are you doing. I start pulling tools out and running to grab all the things I need. I then took over the kitchen counter.

After breaking off the female thread from the mount of the selfie stick, I covered the sides of it with the Liquid Nails glue and then set it inside the hole of the camera. If you look through the middle of the threading you will see something white. I actually had a small piece of sticky foam from an eye glass kit. You know those white foam pieces that you stick to your frames that are designed to rest on your nose. It was actually the perfect thickness to keep the thread flush with the outer base of the camera. 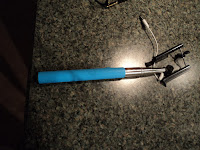 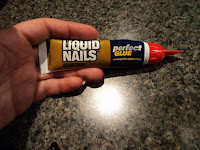 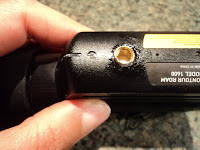 I cannot believe it took me 2 years to finally fix this camera. I will now be able to enjoy it again. Eureka!

Have you ever had to fix something like this before? I seriously had the answer in front of me this whole time.