What to do about the Sons of Anarchy Craze?

The Sons of Anarchy craze just doesn't seem to be letting up. The 5th season of the show launched this past fall in 2012. The 4th season was the last season I watched. I lost interest in it all, when I started attending events and people started talking about adding accessories to to make their bikes look like SOA bikes. Even better, tattoos or apparel. Since then, I've just been disconnected.

A few companies are offering the custom 1/4 fairing for HD Fat Bob bikes. While others offer derby covers, turn signal and even the fairing and bars kits in one! 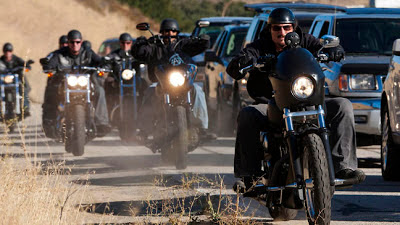 My question: Why on earth would you want to replicate being a 1%' er? Obviously, the show depicts a bike gang that is fictional. Nonetheless, organized motorcycle clubs still exist in this country (and world). Whether you've seen them or not, they are there!

I've rode on rides with many 1% clubs. There is an element of respect to show, as well as your own smarts of when to leave. When I lived in Arizona, I did an annual ride that was extremely popular called the Hells Angles Prison Run. I joined in cause the ride was through Pinal County. One of the most beautiful areas in the valley of the sun. There is no way on earth would I have pulled up to that ride, with a 1/4 fairing, SOA derby cover and shirt and thought I was a bad ass. A) You'd get laughed at big time! B) You'd get laughed at big time! C) You might get your ass kicked so more people can laugh at you big time!

When I lived in Milwaukee, I meet another group of riders called the Outlaws - Milwaukee Chapter. The community feared them and the cops were present anytime these guys were around. Last year I hurried back to Milwaukee from a 5,000 mile trip I had taken to Carson City, NV for an AMA event. I was rushing to get back so I could attend the Rockerbox Rally. When I got to the rally, the Outlaws were parked right in front of my friend Sue's corner store. Whether they liked or not, or even me, we were all left getting to know each other a bit more that day. I told them I just hauled ass back for this rally and they talked about their bikes. After that day anytime I saw them, I would get invites to all their events. (Never went though- no time) When they would roll in club deep to the Harley Museum Bike Nights everyone would watch them. Like time stopped. They did have some very fancy custom bikes with TV screens, gold leaf work, speaker systems and so on. I always got a head nod from them as they rolled on through. The funny thing about that, is for me, it was just another riding say hey to another rider. It's the people that are with me that always got freaked out by it.

Nonetheless, from my experiences as a motorcyclists you should just be you. People will like you cause of you. There's nothing wrong with joining or being part of a club. I'm a AMA, HOG and RockerFoxMC member, love it! I ride with these groups cause they are part of my identity The AMA helps keeps roads safe and biker laws in our interest. HOG, is my exclusive connection into my Harley family. RockerFoxMC, is a group of women riders in Milwaukee that love to ride and motivate other women to ride. Throwing a SOA accessory on my bike, is like selling out to everything I believe in. It causes a loss of identity and increases the "idiot consumer affect" that Henry Ford Sr created when we developed the Model-T. "Ain't nobody got time for that"- Sweet Brown
Posted by Rania at Friday, February 22, 2013 10 comments:

Two weeks ago today, I decided to do what many think of as the unthinkable. I canceled my contract with my phone carrier of seven years, Verizon Wireless, without signing any new agreements with another carrier. (contract or non-contract) Many of you are probably wondering how could you live without a phone? Well, at first I wasn't sure how it was really going to work out.

My main concern was the model of the phone that I currently own, the Motorola Droid X, a CDMA phone. This phone was a nightmare to own since day one. When I renewed my two year contract, two years ago, I actually choose the HTC Incredible. Loved the phone! Until Cinco De Mayo and a really bad drop in a gas station toilet, which put an end to that thrill with only three months of ownership. After filing a claim with Asurion, and paying a $99 deductible, I was told that the HTC wasn't available for a replacement and I had to take a Droid X. Well since I didn't have a choice, that's what I ended up with. When I received it, I ended up having to send it right back. It just had so many issues with it. One month later, I sent it back again for another replacement phone. The last year and half after that, I've had countless customer service conversations with VZW and Asurion and neither will admit the phone was a consumer nightmare! I've read all the forums, everyone was complaining about similar issues and lack of acknowledgment from the carrier.  Even rooting this specific model is a nightmare. In addition to that, VZW just doesn't know how to provide tech support for smart phones. Hence why when you call, they direct you to call Asurion. Those guys want to fix your phone for another deductible charge of $99. Anyways, I was feed up! Done! My contract end date was Feb 3rd and that day couldn't come any faster.

As a new week begins, I can report that phone actually works great now as a WIFI only device. It's amazing! Why wasn't this the case the last two years??!! I'm mind boggled! If I could get the firmware changed then I'm sure the phone would be even better. I've been using free text and call apps such as Pinger and Voxer. Also, there's Google products like, Hangouts and Gtalk. As long as I'm in a WIFI zone, life is good.

When you think about it, why are we paying to stay in carrier contracts? WIFI is available in many downtown cities, around universities, restaurants, cafe's, airports, friends and families homes. If you live in a major city area such as NYC, Chicago, Philly, you really could make do with an iPod (or similar type of mobile device, like a tablet). If you're traveling, grab a pre-paid phone if your concerned about breaking down and need the security. Other than that, just stop at the million of McDonald locations all over the country for WIFI use and get back on the road. When it comes down to it, there is a McDs on every block and at least that you can count on.

To wrap things up, I feel great to not be tied to a carrier. I feel like it was the best thing I've ever done. I'll continue to chronicle my experience to keep you all updated on how things go.

Til the next blog, cheers my friends and remember to Pay it Forward!

Ok, time to wrap this up. Sorry I've been busy with home remodels, custom projects for a car that I haven't had time to finish this blog. Please accept my apology friends. While in New York I got to finally meet +Rachael Fuzzygalore. It was such an honor. We've been chatting on the web for a couple years and she tunes in for +MotoChat when she can. Truly a woman rider that really is inspiring. Anyhow, we got to talking about the show and what was going on, while my buddy Captain Ninja was disagreeing about her love for +Ural Motorcycles . He just didn't get it, "cause they go so slow". lol It was funny! We all have our opinions. 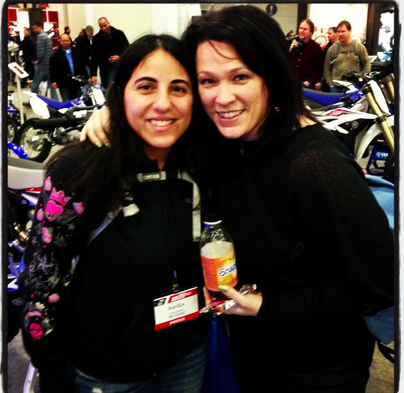 Got to meet another celebrating and motorcycle enthusiast Michael Wolf from American Pickers. Indian Motorcycles invited him to the show as a guest of theirs. Also, if you didn't know Polaris also bought Indian, in addition to Victory. It was kind of funny watching the same guy give us a run down of three different brands of bikes. 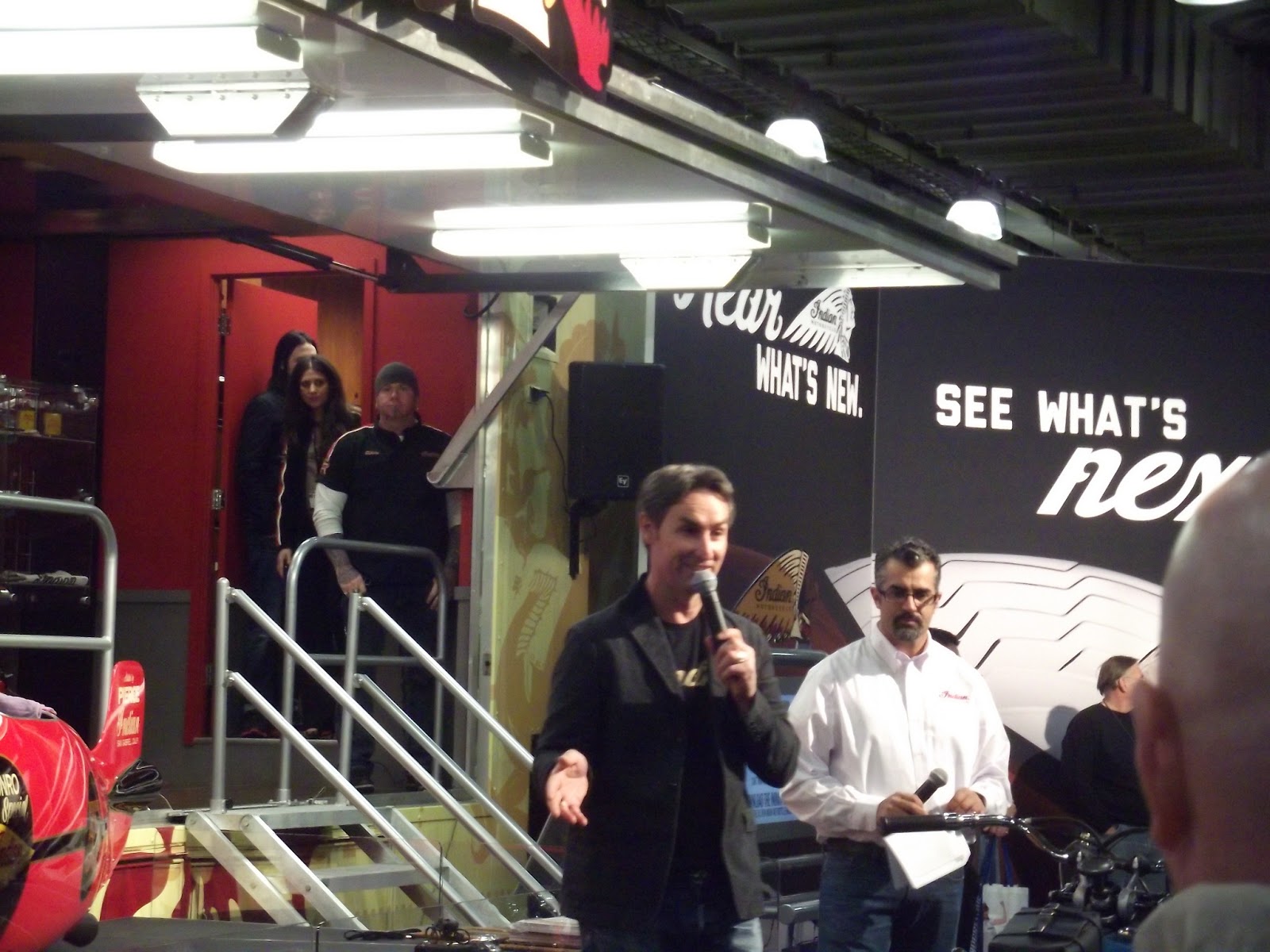 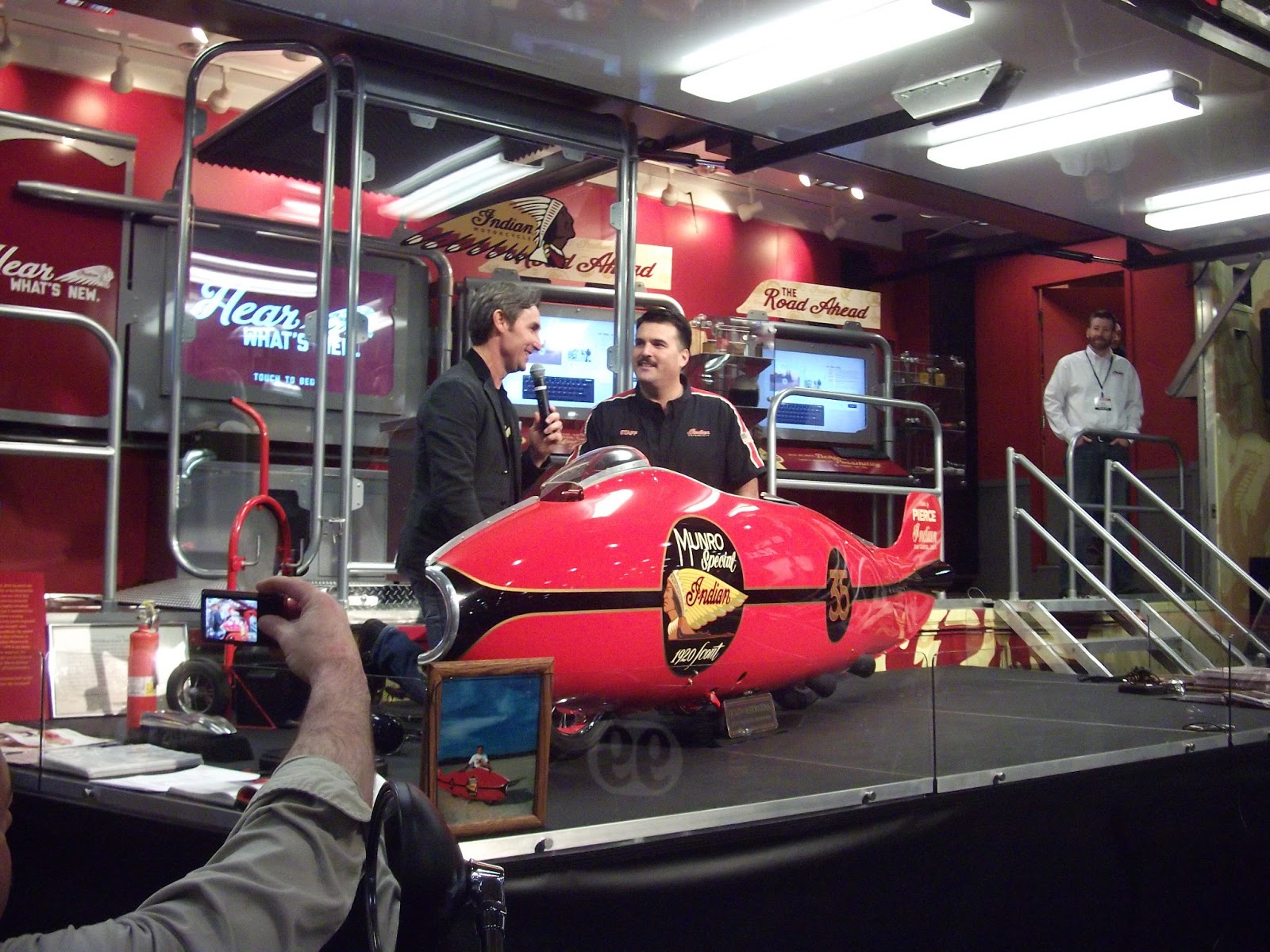 Ducati had a few great bikes and gear on display as well as espresso. The espresso was just as impressive as their line of motorcycles. Truly beautiful bikes, but well out of my price range, well at least for the ones I really want. ;) +ZERO MOTORCYCLES was also at the show and had their sport, adv, off road and city cruiser all on display. They have a mobile app that they developed that allows you to adjust the performance of the bike. Pretty cool feature, nice looking bikes. 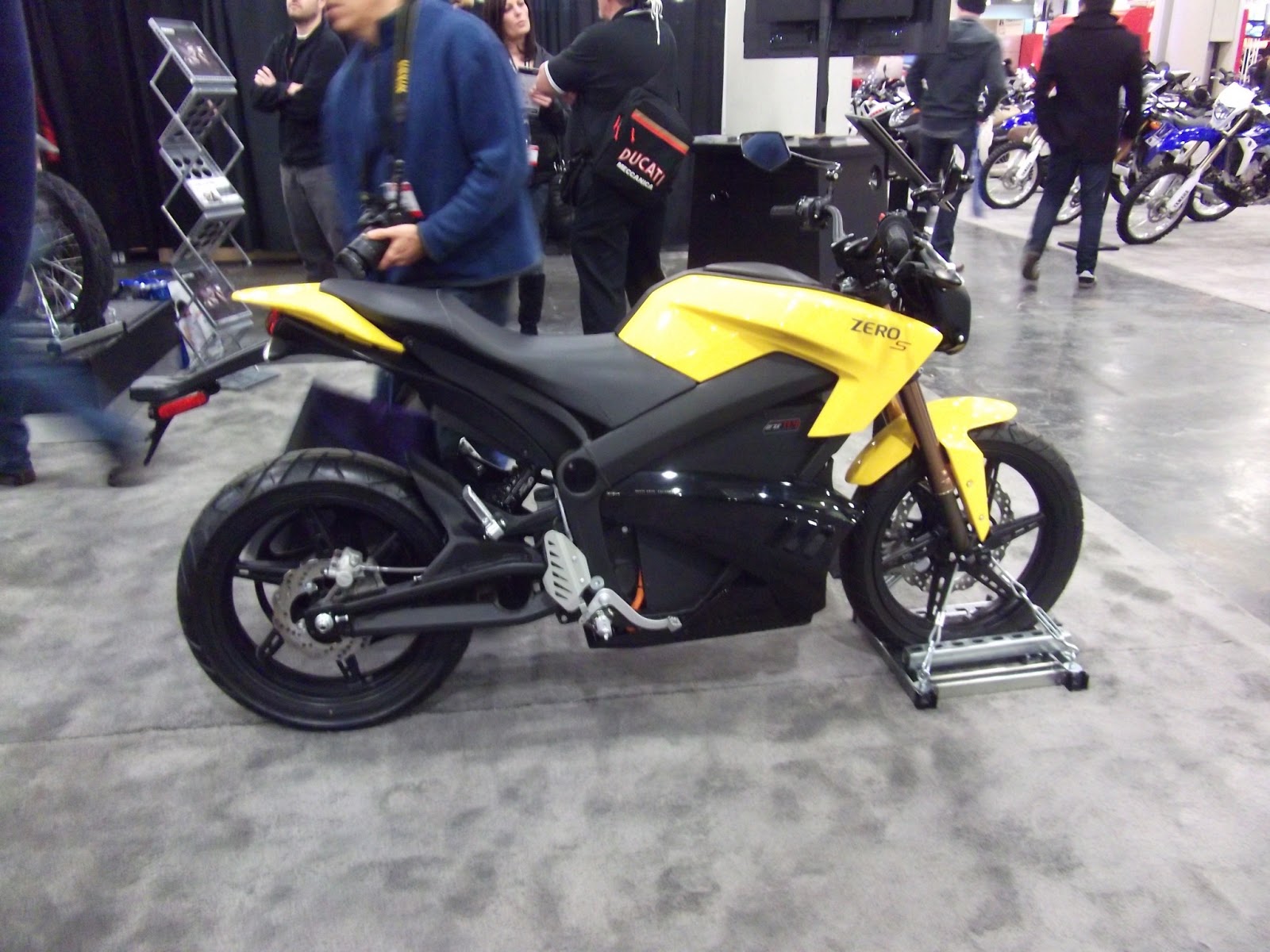 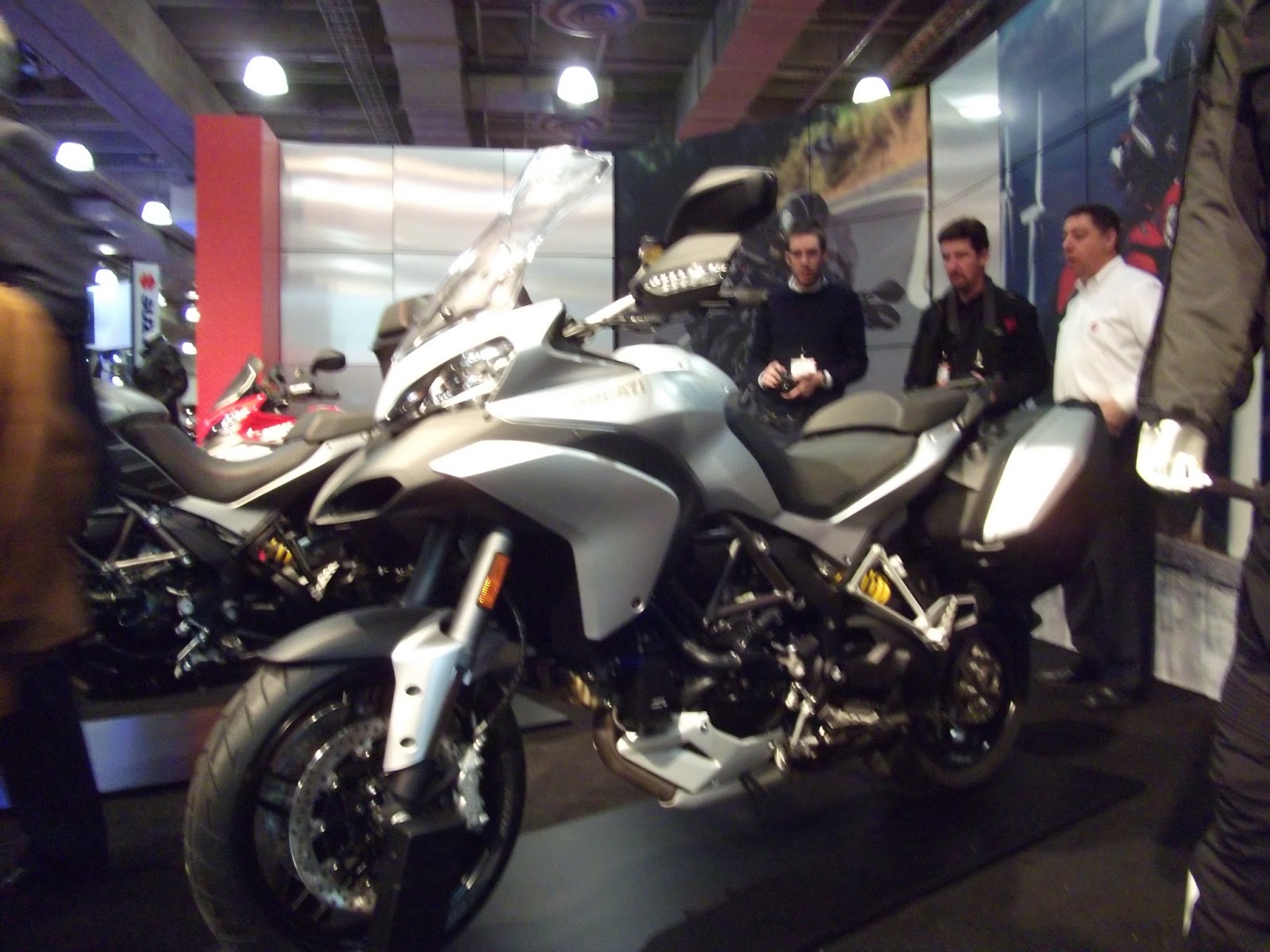 Here's some of my favorite custom bikes that were on display all over the showroom floor. Some really sharp bikes! 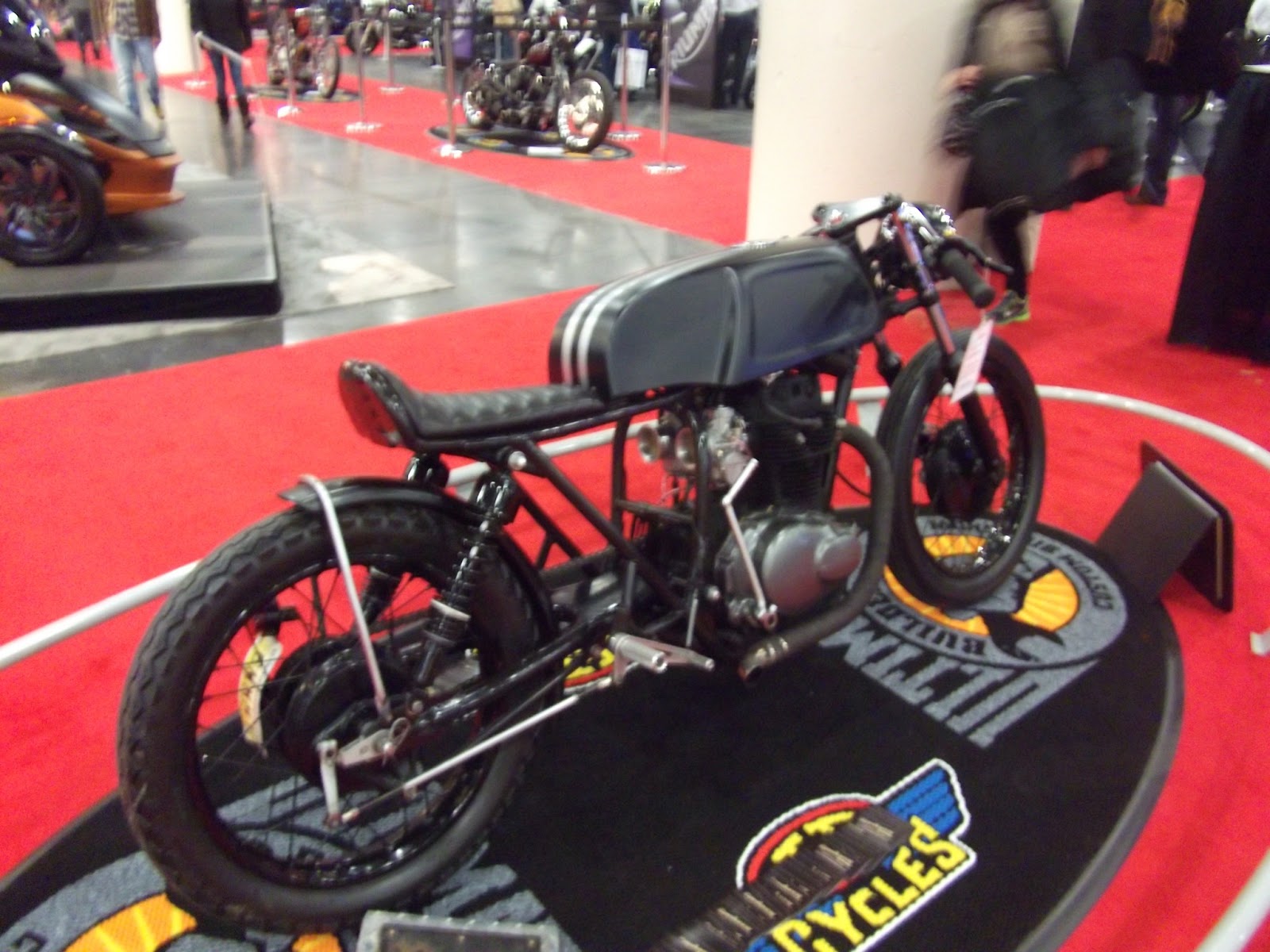 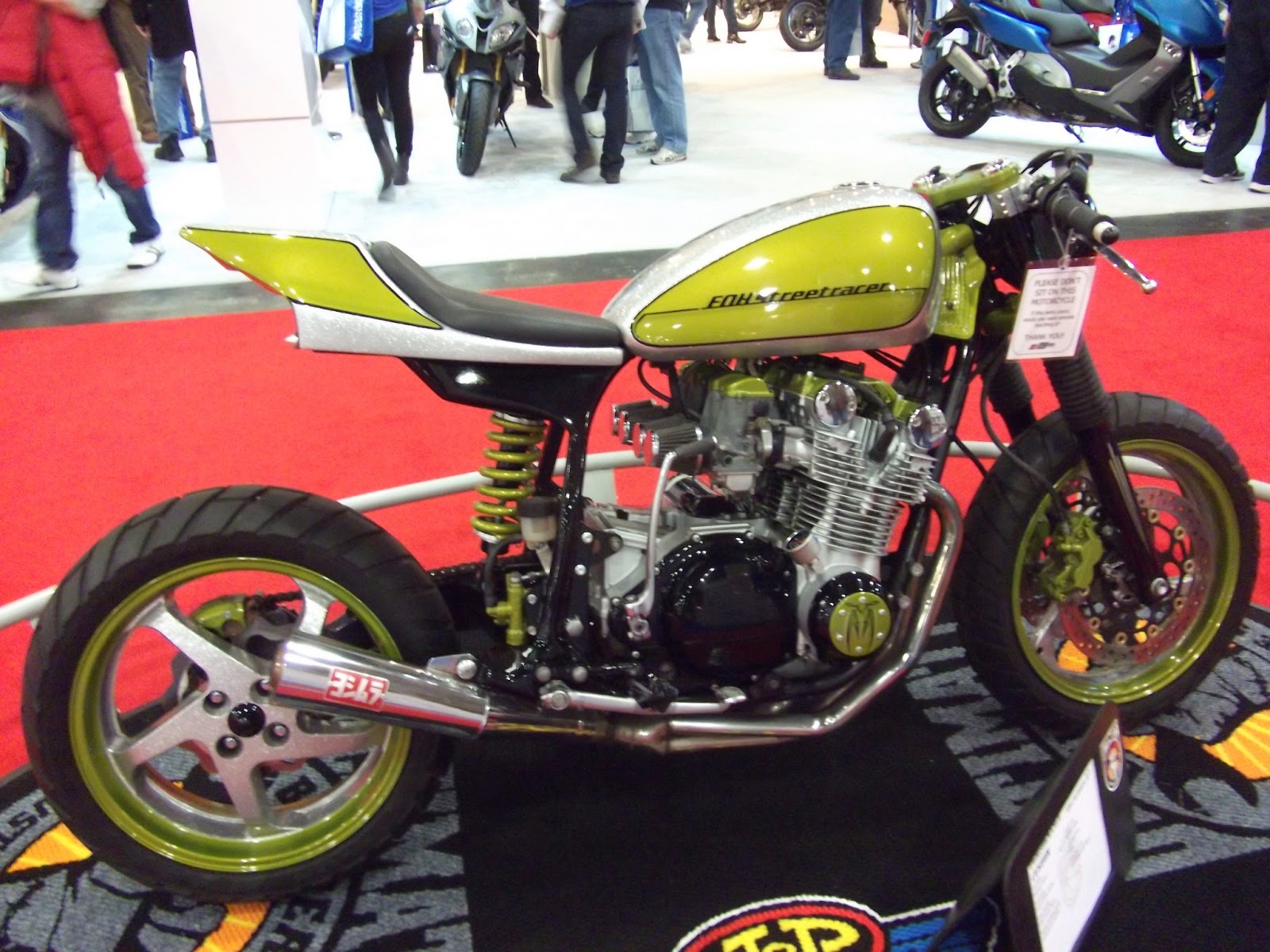 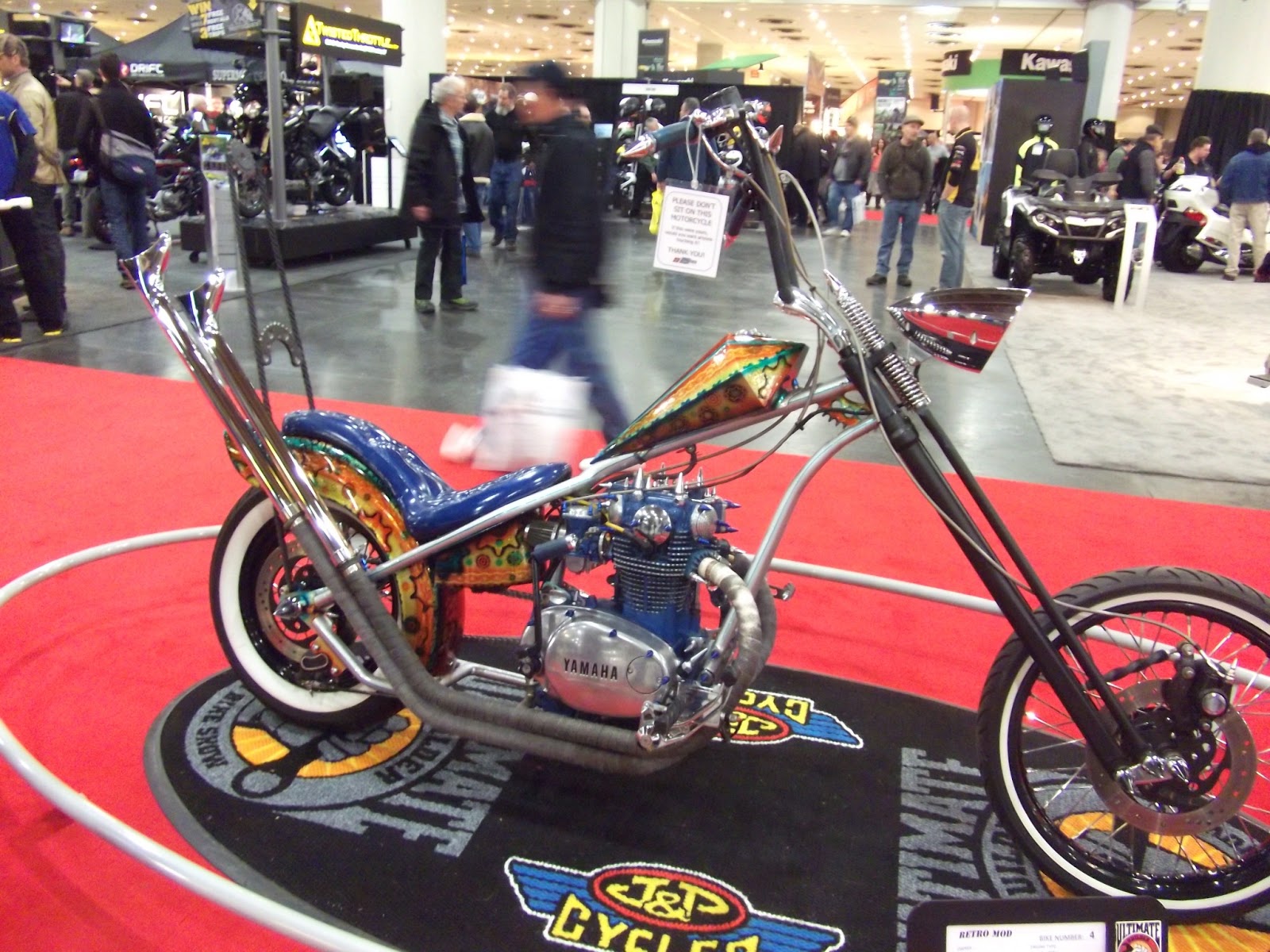 Before heading out I had to pay a visit to the +MotoGP bikes that were on display. 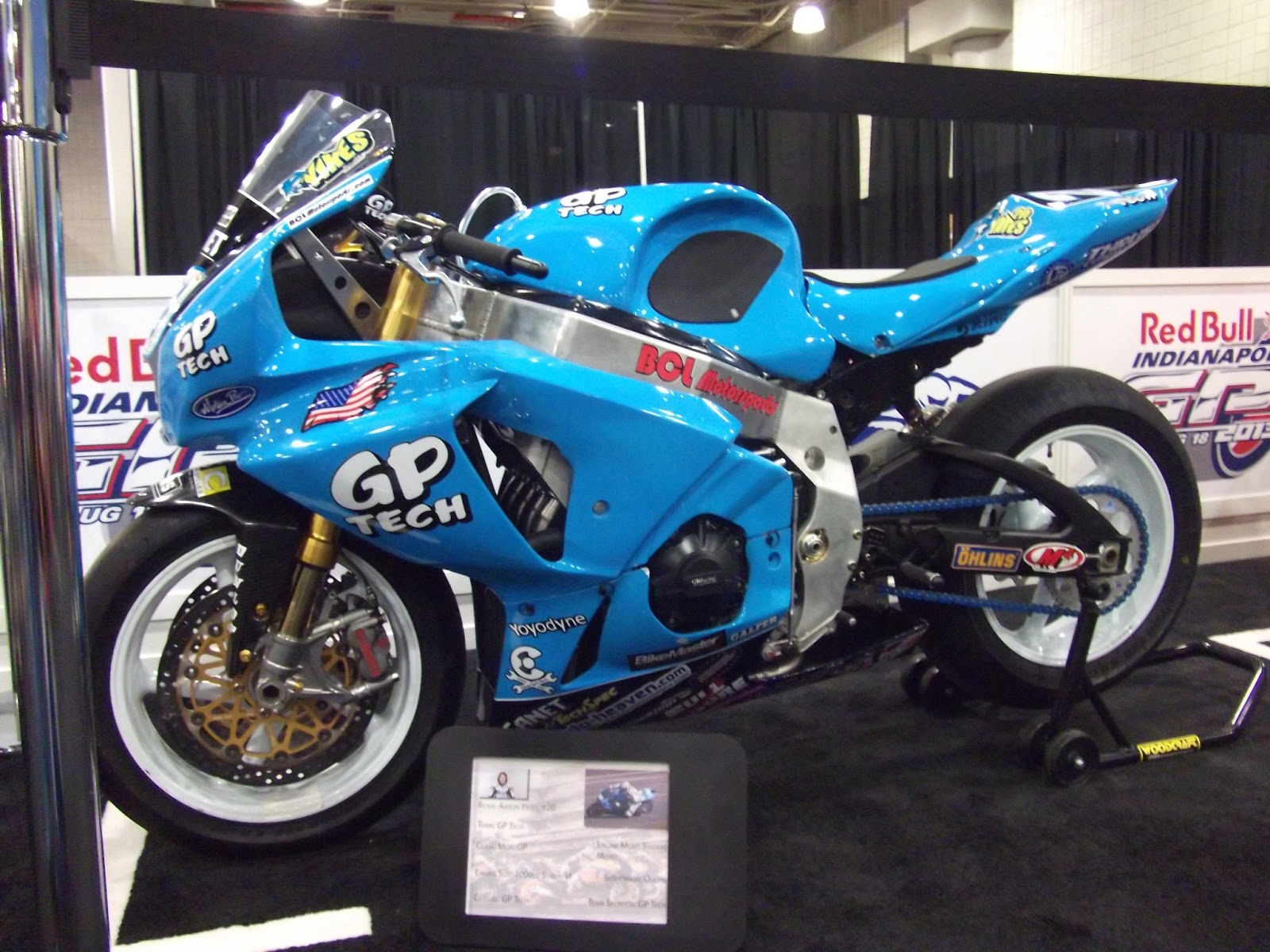 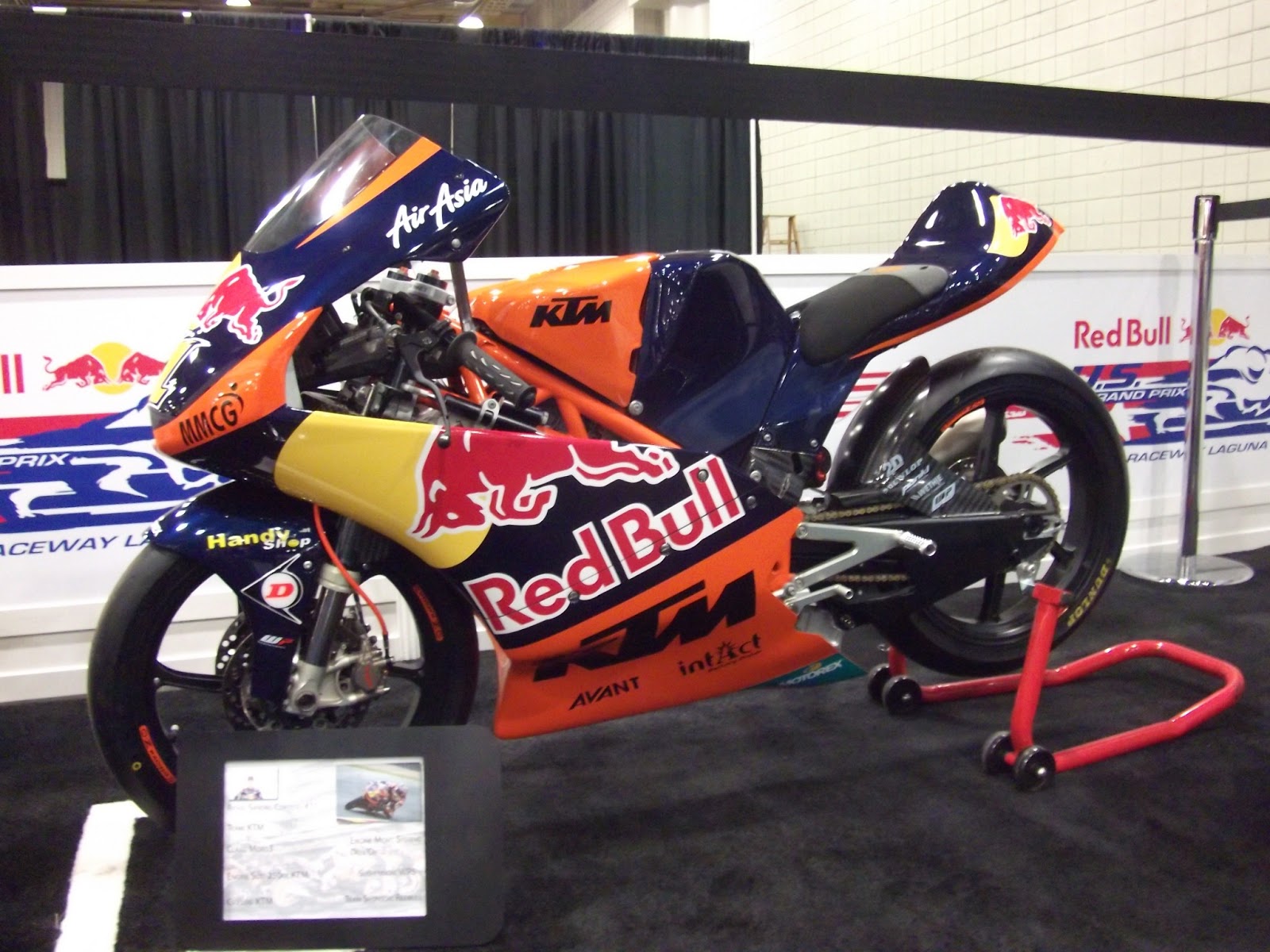 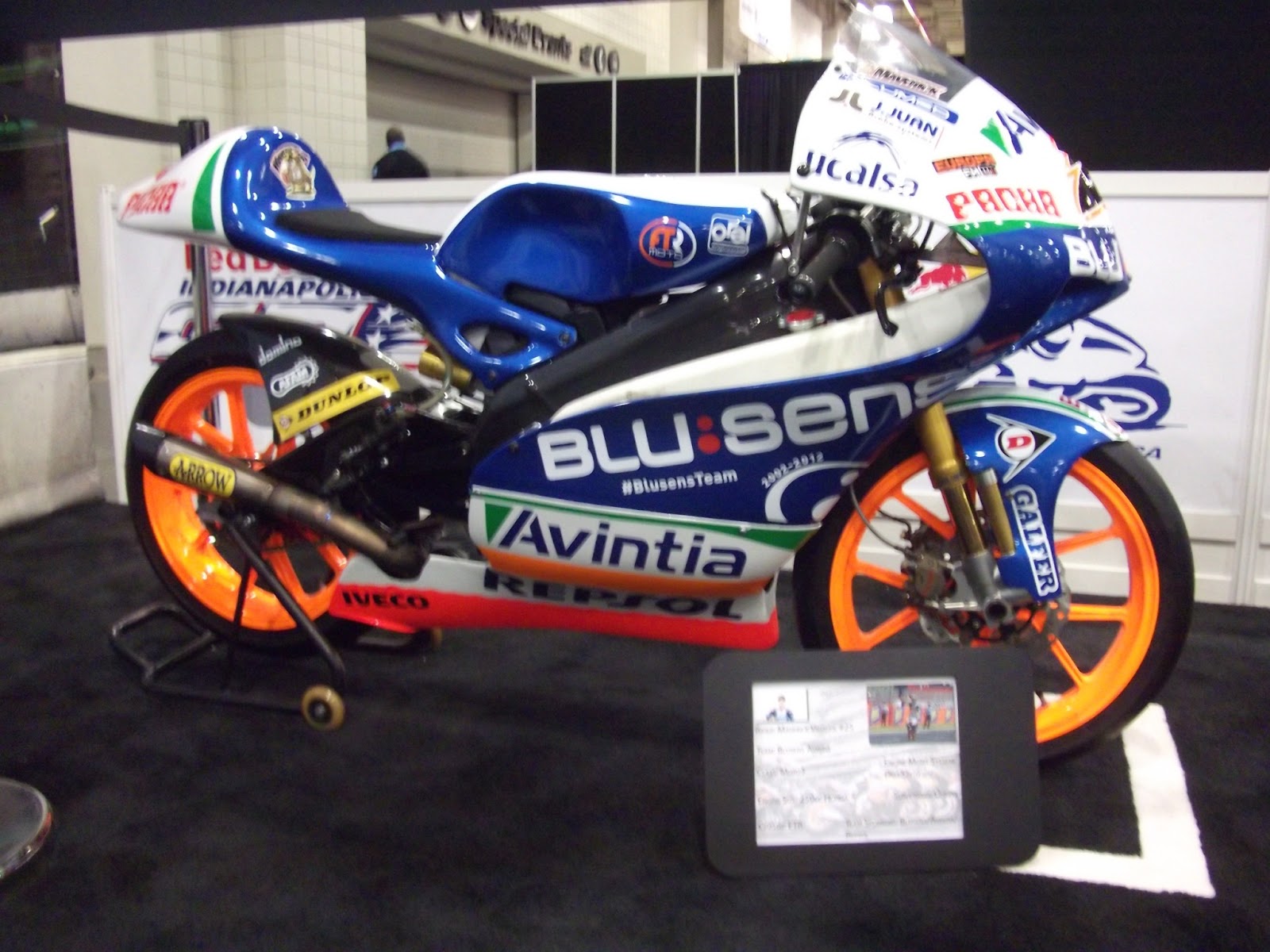 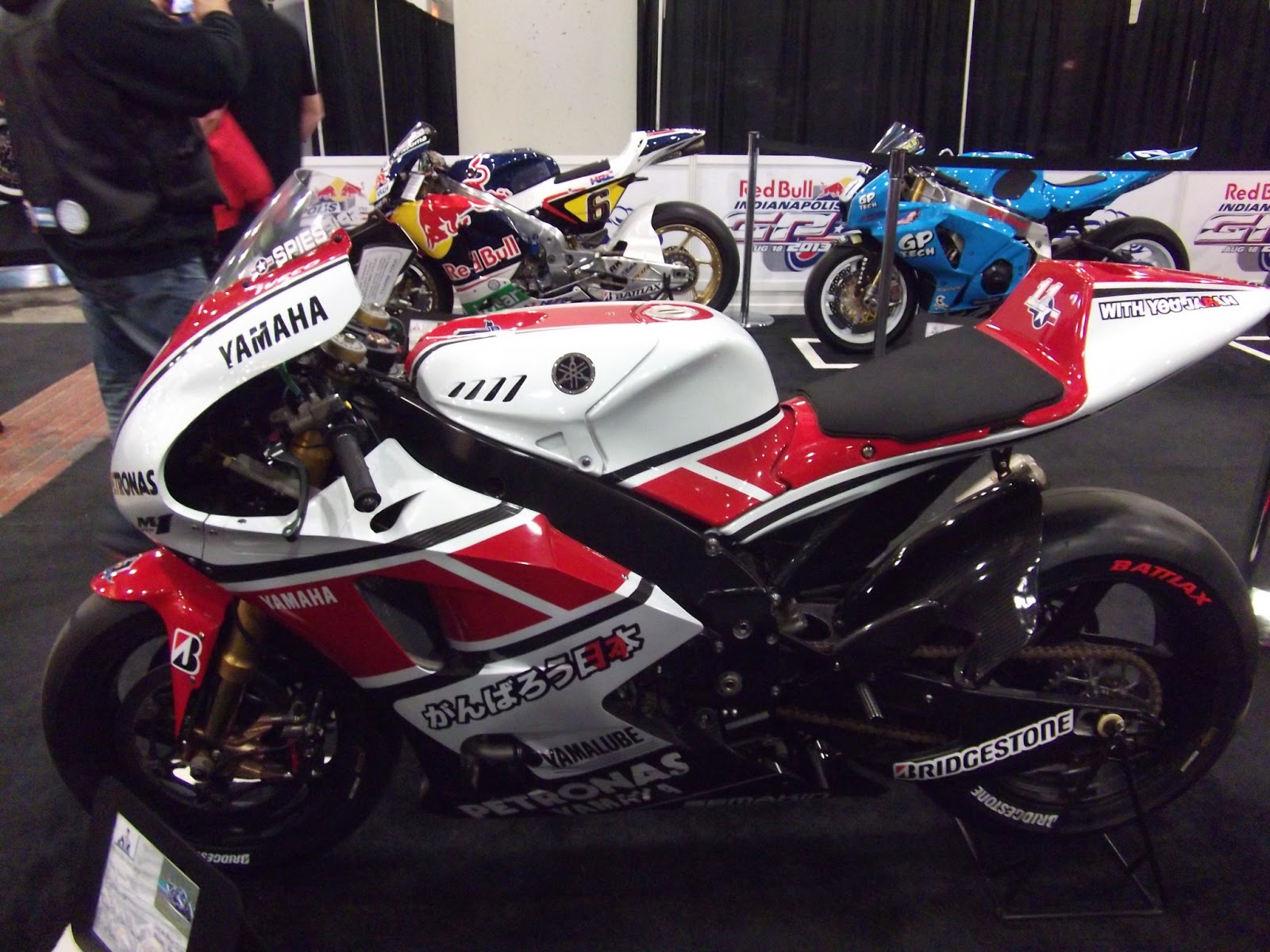 Well my friends, that's it for this years show! I'll end it with me sitting on this BMW, boy do I look good on that baby! lol Cheers to you and thanks again for reading this series of posts. 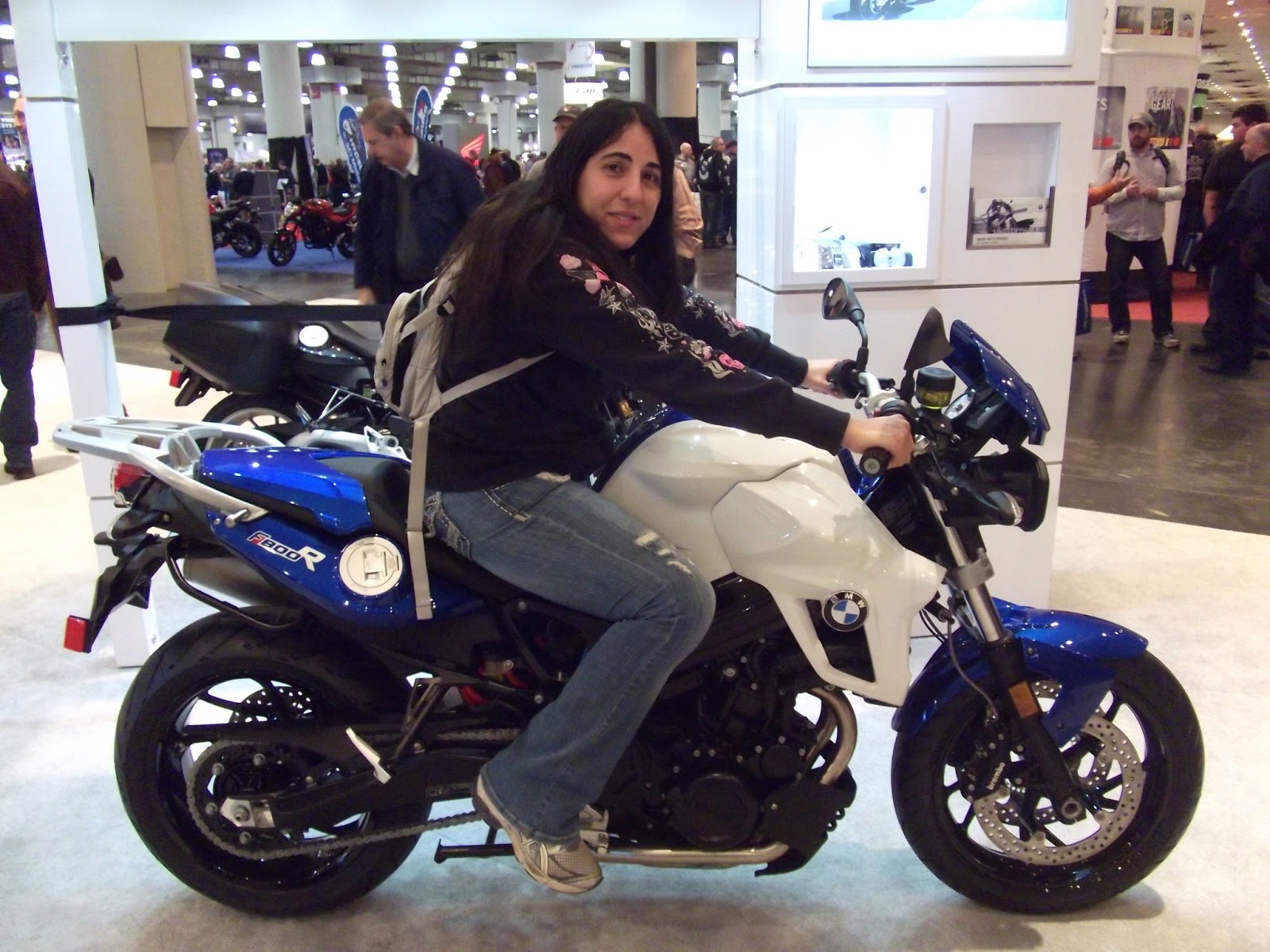